Where do Skip and Pip live?

Since Skip and Pip debuted in their Valentine’s Day comic in February 2015, I have been creating comics for them as I could fit it into my professional art schedule. Ideas come from everywhere...my kids, the crazy neighbors and sometimes stories that stream across my social media. A bit more than a year into this wild adventure of two little boy bunnies in love it became apparent that winging it comic by comic was not going to work anymore.

It was time for some universe building.

Many of my author friends start with creating a map of their own universes. That seemed like a good place to start. The idea for the next comic coming up happens in another part of the burrow and I realized I didn’t have a solid sense of what Skip and Pip’s home looked like. I could have just sketched it out on a piece of notebook paper and tucked it away for reference.

But I am an illustrator. Naturally it would have to be color and chock full of details.

What an exciting process to go through. What did their home look like? How did the rooms flow into each other? I’d featured the front door in several comics but what was behind it? The living room and an office have appeared in other episodes and I would need to account for those. Designing the floor plan took far more thinking than I expected.
​
Wow, was it ever fun.

Drawing a blueprint was a first for me so there are parts of this floorplan that are not exactly to scale. That’s okay. For my purposes it is perfect. Click on the images if you would like to see the art full scale.

A surprising thing happened during the creation of this. Once a visual of their home was finished, I conceived many more ideas for future comics. I can hear them talking in each room of their home. 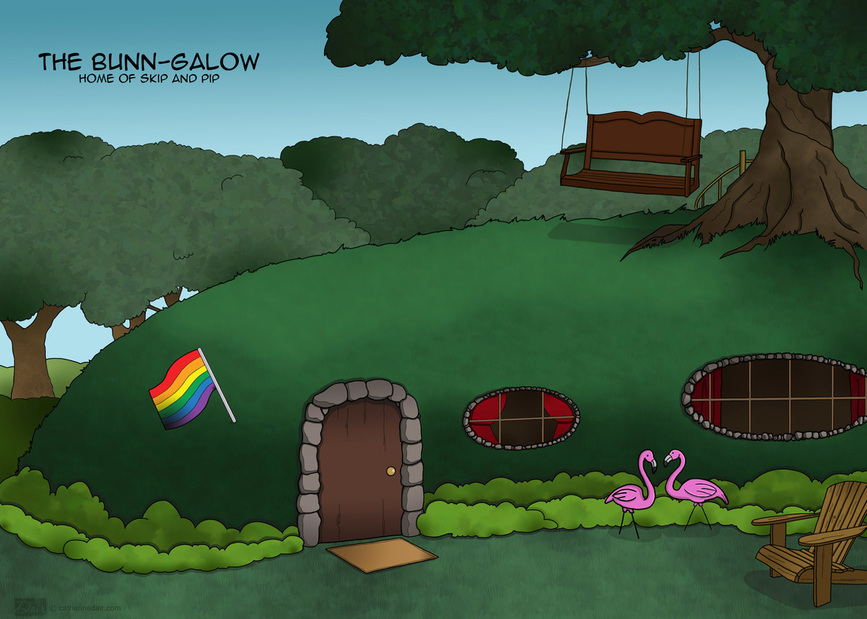 Once the floor plan was completed, I needed to create the full outside and show what lies past the kitchen window. The spiral staircase which appears to the right of their bedroom leads up to the top of the hill and exits by the tree swing. Every rabbit burrow needs more than one exit.

Watership Down by Richard Adams no doubt influenced that decision.

I hope you enjoy the art for The Bunn-galow, the home of Skip and Pip, and found in a little piece of forest heaven called “Rainbow Glade”. The boys have many adventures ahead of them!
Powered by